Australia’s Bushfires from a Due Diligence Perspective 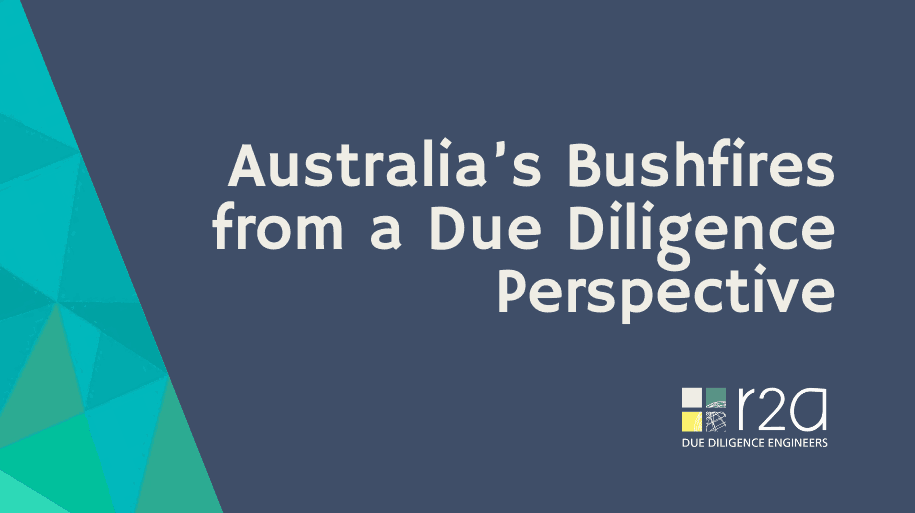 Like you, we have been devastated by the recent bushfire events in Victoria, NSW and Queensland. We hope you have been able to stay safe and have not been directly affected. Richard and I have been reflecting on bushfires in history and if there are any key take away messages from a due diligence perspective.

Richard’s involvement with bushfire risk reviews commenced in the 1980s following the Ash Wednesday fires in Victoria. As part of a research project, Richard completed a threat and vulnerability assessment to see if there were any precautions that were missing from (then) current practices.

The outcome was that there were significant risk reduction benefits associated with improved town planning. This required the placement of huge fire breaks, such as golf courses and potato fields to the north and west of the town.

A change in wind direction is one of the most dangerous influences on fire behaviour. Many people who die in bushfires get caught during or after a wind change.

In Victoria, hot, dry winds typically come from the north and northwest and are often followed by a southwest wind change. In this situation the side of the fire can quickly become a much larger fire front.

Richard was then a member of the Powerline Bushfire Safety Taskforce that followed the Black Saturday fires in 2009.

My involvement continues on the Powerline Bushfire Safety Committee.

One of the key findings of the Black Saturday Royal Commission was that the majority of the fires were started by electrical assets and significantly contributed to the huge number of fatalities.

I am very proud to be involved in the roll out of REFCLs (Rapid Earth Fault Current Limiter) in Victoria, and their contribution to improving bushfire safety.  Data from a total fire ban day in November 2019, revealed that REFCLs on the electrical network are working to reduce the number of fire starts from electrical assets.

Although bushfires of this magnitude were a new occurrence for NSW in 2019/20, there are many learnings from past Victorian fires that can be applied.

And, it is interesting to compare the community’s response to cyclones in the north of Australia to community responses in bushfire prone areas.

Buildings in cyclone prone areas are subject to more stringent building codes and during cyclone warning periods. It’s typically practice for people living in those areas to go home and prepare their house. All loose items of furniture are removed or tied down, shutters are closed, and communities are generally shutdown.

The same does not occur for bushfires prone areas.

As due diligence engineers we ask the question is there anything more that can be done?

The focus should always be on precautions rather than mitigations and we should certainly learn from past experiences.

In light of these recent events, we have revisited our Safety Due Diligence White Paper and Powerline Bushfire Safety Taskforce Case Study. We hope you find them interesting and insightful.