Richard Robinson, R2A Partner, was the expert risk management member of the panel and R2A provided the methodology and modelling approach adopted by the Taskforce.

In early 2012, the Victorian government accepted all of the recommendations of the Powerline Bushfire Safety Taskforce (Taskforce) with regard to powerline infrastructure and management in Victoria.

This Case Study was originally written in 2012 and updated in January 2020.

By using this methodology all practical precautions can be discussed and the job is then to determine what cannot be justified on the balance of the significance of the risk vs. the effort required to reduce it (after Sappideen and Stillman), as shown below. 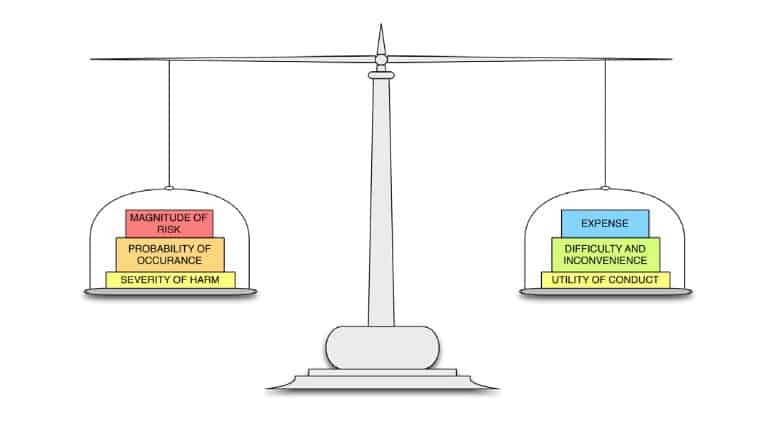 HOW WOULD A REASONABLE DEFENDANT RESPOND TO THE FORESEEABLE RISK?

The key aspects of the diagram above include –

The precautionary approach is also the analysis method required by the judicial formulation of causation established by the courts.

After a serious event, the courts look to see (with the advantage of 20:20 hindsight) what were the precaution/s that should have been in place but were not.

Risk is not strictly relevant since, after the event, likelihood is not relevant. The fact of the occurrence of harm at that point is certain.

As an Australian judge has been reported as noting to the engineers after a serious train incident:

What do you mean you did not think it could happen? There are 7 dead.

That is, the notion of risk is really only used to test the value of the precaution it is claimed ought to have been in place.

How risky a situation is before the event is not germane except in so far as an aid to determining the reasonableness of possible precautions.

The adoption of the precautionary approach is perhaps the first formal occasion where the outcomes of this approach in infrastructure terms can be assessed formally.

The precautionary approach focuses on all practical precautions with the subsequent task to determine what cannot be justified on the balance of the significance of the risk vs the effort required to reduce it.

This differs significantly from the hazard based approach to risk which is the one popularly described in the risk management standard AS/NZS ISO 31000; that is:

The diagram below represents the two approaches. 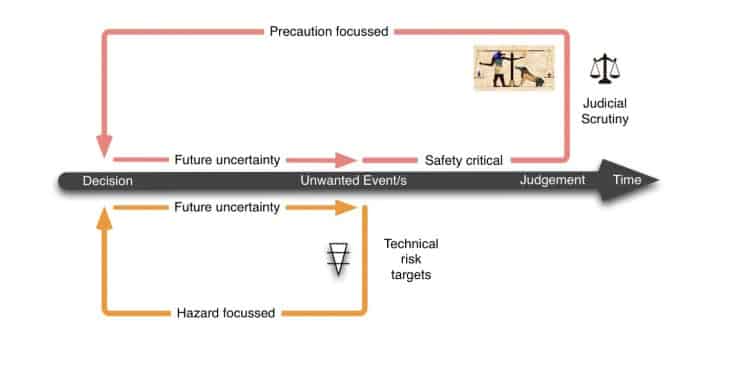 The precautionary approach provides more safety certainty and can be used for defence in the case of judicial scrutiny.

R2A developed a threat barrier model for the Taskforce to demonstrate the precautionary approach. The model is shown below.

The loss of control point is important legally. It is always better to prevent the problem, either by eliminating the threat or enhancing precautions than by trying to recover the situation after control is lost.

This is entirely consistent with the hierarchy of controls described in OHS legislation and risk management literature generally. By correctly identifying the loss of control point, the laws of man and the laws of nature can be made to align. 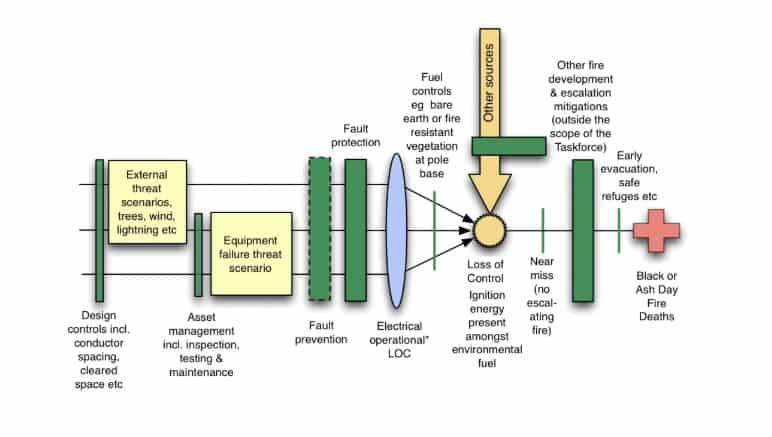 The loss of control point was defined by the Taskforce as the point at which sufficient ignition energy is present amongst environmental fuel to start a fire. That is, a potential bushfire start. Ignition energy is a combination of fault energy and duration.

Defining the loss of control point in this way had the added advantage of representing the scope of the Taskforce’s endeavours, that is to the left hand side of the diagram.

Fire starts due to sources other than powerlines are shown by the vertical arrow. Mitigative barriers are after the loss of control point and are outside the Taskforce’s Terms of Reference.

Two diagrams were created to graphically show the difference between a fire start during the bushfire season (shown above) and on a Code Red day (shown below). 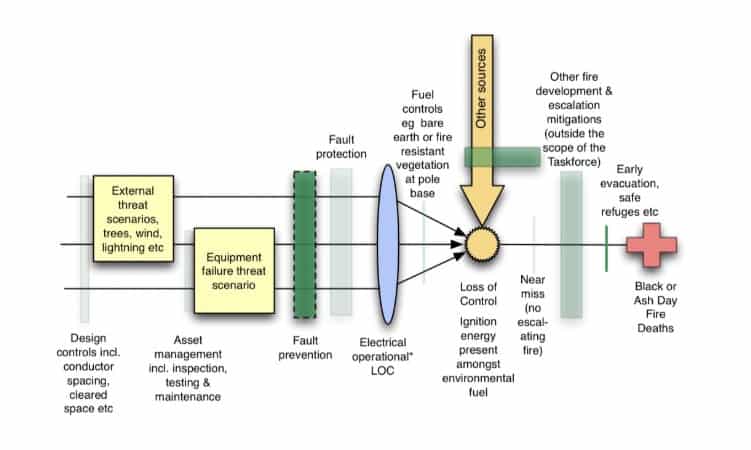 The difference between the two diagrams is the fading of many barriers on a Code Red day.

For example, on a Code Red day the extreme conditions make the likelihood of a fire start if an electrical fault occurs, higher. That is, the fault protection barrier is weaker.

Further, on Black Saturday the CFA (Country Fire Association, Victoria) and DSE (Department of Sustainability and Environment) were overwhelmed with calls and were unable to respond to every request for assistance, meaning the escalation control barrier was weaker than usual too.

R2A also developed a precautionary risk analysis model to test the value of potential, practical precautions based on the threat-barrier diagram described above. That is, all practicable options are described and the model tests for precautions or combinations of precautions that provide the best investment.

Based on the Black Saturday (2009), Ash Wednesday (1983) and Black Friday (1939) fires, the model characterises the risk associated with these days as: 100 Victorian deaths every 25 years.

This return frequency has been reduced to one in 20 years to take into account predicted weather pattern changes. This is used to normalise the relative risk estimation of the rest of the model.

Update: The 2019/20 bushfires although they have covered a significant area haven’t, thankfully, had the huge number of fatalities as the fires listed above, and have happened across weeks rather than one or two days.

Based on the analysis of consequences produced by PHOENIX, the model has three levels of criticality for rural areas: extreme, very high and high. This is presently characterised in the ratio of 1:0.3: 0.1, with extreme consequence areas as the base (worst) case.

Relative risk per unit length (km) is presently done for life safety only, for an Ash or Black day. SWER (single wire earth return) and multi-wire powerline options are identified.

The precautions that are considered are shown in the table below, with the values used for the extreme consequence region assessment.

Results are initially presented as a plot of quantum of risk vs quantum of effort on a relative risk basis for a unit length of a powerline in the representative bushfire consequence areas. The model presently applies to the three fire loss consequence regions and is then summarised state wide.

COMPARISON OF EFFECTIVENESS OF PRECAUTIONS FOR THE EXTREME FIRE LOSS CONSEQUENCE AREAS, WITH EACH PRECAUTION CONSIDERED INDEPENDENTLY

The Taskforce concluded that the most cost effective solution to reduce the likelihood of bushfires starting as a result of powerlines is the widespread deployment of new protection network technologies (REFCLs and new generation SWER ACRs) with assumed changed network reclose function.

This is to be combined with targeted replacement of overhead powerlines with underground powerlines or insulated cable in the highest fire loss consequence areas.

Energy Safe Victoria will then review progress against these Bushfire Mitigation Plans on an annual basis. This is estimated by the Taskforce to cost approximately $500 million over 10 years.

Further, the Government will contribute up to $200 million over 10 years for a program of power line conductor replacement. Based on the estimates of the Taskforce, this will replace over 1,000 km, with the final length to be replaced dependent on detailed engineering and geographic assessment. The focus will be on locations with the highest fire loss consequences.

In 2011, the Victorian Government announced a $750 million Powerline Bushfire Safety program (PBSP). The 10-year program will deliver on recommendations (27 and 32) of the 2009 Victorian Bushfires Royal Commission and aims to reduce the risk of bushfires caused by electrical assets without causing significant impact to electricity supply reliability.  ESV is assisting the Department of Environment, Land, Water and Planning (DELWP) in the roll-out of this program.

As part of the program the Powerline Bushfire Safety Committee (PBSC) was established in 2016 by ESV under Section 8 of its Act.  The PBSC exists to provide the Director of Energy Safety (DoES) with comprehensive expert advice to support ESV in its administration of the Electricity Safety (Bushfire Mitigation) Amendment Regulations 2016 (the regulations) and any advice ESV may, in turn, provide government on further policy changes that maybe required in the light of actual experience.

R2A Director Gaye Francis sits on the committee as the risk management best practice expert.
Since the program commenced, AusNet Services and Powercor have embarked on their REFCL program to install REFCLs at the nominated substations. To date REFCLs have been installed and are in operation at 16 zone substations as part of the Tranche 1 and Tranche 2 works.
The ACR program and Powerline Replacement program are both well progressed with both distribution businesses expected to complete the works by the end of 2020.

You can read the Victorian Government's response to the taskforce recommendations here.

Want more information on the due diligence approach used?

If you'd like to learn more about the due diligence methodology outlined in this case study, R2A runs regular two-day Engineering Due Diligence workshops in partnership with Engineers Education Australia, as well as tailored in-house briefings for organisations.

Or you can contact us direct to discuss your specific needs.