The importance of Safety Due Diligence: Keeping directors out of jail 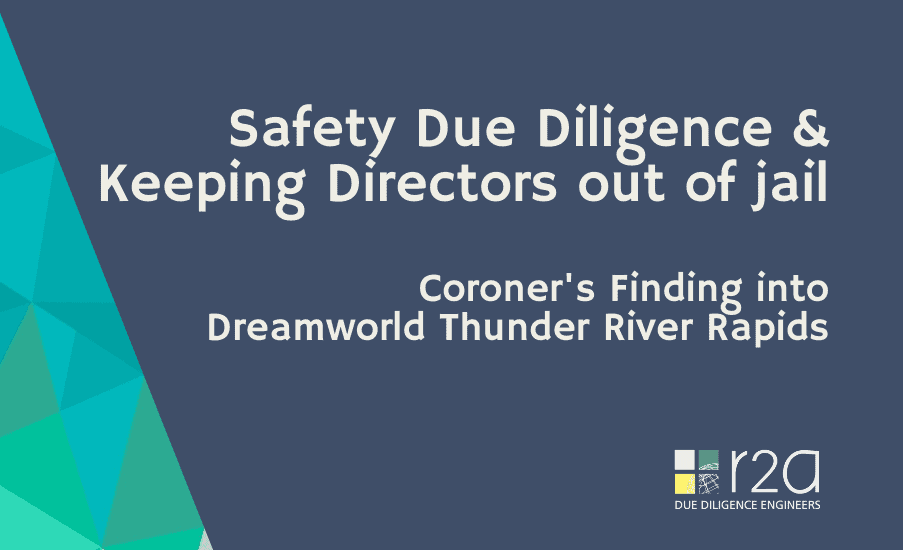 The death of four young people at Dreamworld in the Thunder River Rapids in October 2016 has brought the prospect of criminal prosecution of Directors for safety failures to the fore, or, as we say, Safety Due Diligence.

Press reports have indicated that the Queensland Government has accepted the Coroner's findings and referred the matter to the independent Work Health and Safety Prosecutor to decide whether action would be taken against Ardent, the owners of Dreamworld. Presumably such action would likely be criminal proceedings under Section 31 Reckless conduct—category 1 of the Qld WHS Act 2011.

Reckless Category 1 offences are usually summarised as ‘knew or made or let it happen’. Simply put, it asks:

Did the Board (especially the Chairman and Managing Director of the day) know of the issue and ensure that all reasonably practicable precautions were in place, or had they downplayed it and relied on ‘luck’?

Based on press reports, it seems as though the ride’s safety issue was a known problem and despite the expressed concerns of employees, it was basically ignored or, at least, not taken seriously.

Criminal offences must be proved ‘beyond reasonable doubt’ which is a very robust test.

To give a feeling for what it entails, the prosecution of a General Manager in ACT in 2015[1] provides insight.

In this case the Director of Public Prosecutions acted on behalf of Worksafe ACT. Essentially, Mr Munir AL-Hasani was charged as an Officer (General Manager) of Kenoss Constructions, a small family owned (husband and wife directors) road construction company. over the death of a contractor.

For the most part, the charges were proved. However, during the hearing it became clear that despite the title of general manager, Mr AL-Hasani did not have the right to hire or fire and could not commit corporate funds. Accordingly, Magistrate Walker was not satisfied that Mr AL-Hasani’s role, beyond reasonable doubt, rose to that of an Officer of the company and so the charge was dismissed.

Such a governance detail seems unlikely to apply to the Dreamworld case. The Chairman and Managing Director would appear to be Officers for the purposes of the legislation.

According to the Coroner, the issue was known to the organisation and some precautions, but not all reasonably practical precautions, were established.

From R2A’s perspective, this would seem to be a form of failure based on the well-known ‘Rumsfeld manoeuvre’ or an ‘unknown known’. That is, known to the organisation but unappreciated by decision makers.

Can this be proved beyond reasonable doubt in the Dreamworld case? We don’t know, but we suspect that it will be a close-run thing.

At R2A we had anticipated that the rise of such WHS safety imperatives was likely to cause the appointment of technologically savvy Directors; at least in high tech industries subject to high consequence-low likelihood events and in those jurisdictions where proven failure was criminal (initially Qld and ACT). But since then most other Australian jurisdictions have also adopted criminal manslaughter provisions.

All in all, what happens in Queensland next will certainly have the undivided attention of Directors and their safety due diligence processes. As it should.