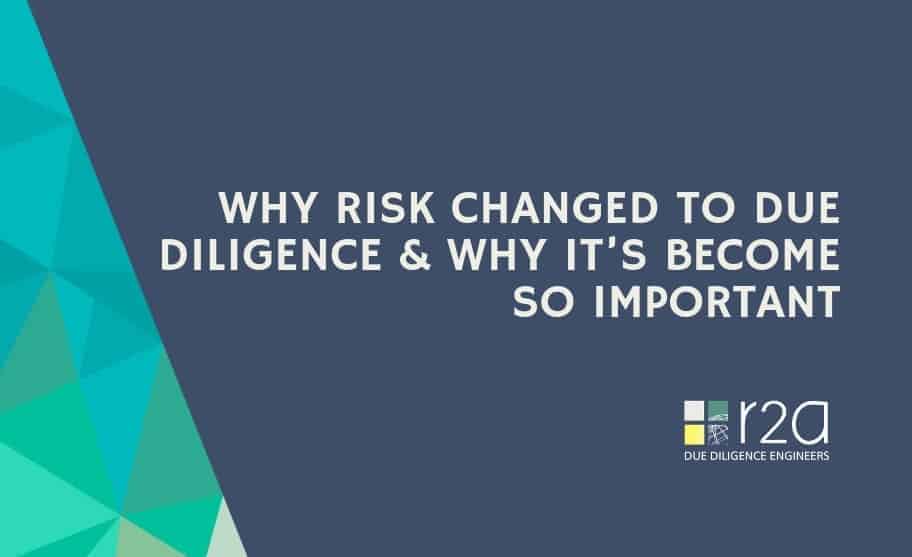 At our April launch of the 11th Edition of Engineering Due Diligence textbook, I discussed how the service of Risk Reviews has changed to Due Diligence and why it’s become so important for Australian organisations.

But to start, I need to go back to 1996. The R2A team and I were conducting risk reviews on large scale engineering projects, such as double deck suburban trains and traction interlocking in NSW, and why the power lines in Tasmania didn't need to comply with CB1 & AS7000, and why the risk management standard didn't work in these situations.

And, what we kept finding was that as engineers we talked about high consequence, low likelihood (rare) events, and then we’d argue the case with the financial people over the cost of precautions we suggested should be in place, we’d always lose the argument.

However, when lawyers were standing with us saying, 'what the engineers are saying makes sense - it's a good idea', then the ‘force’ was with us and what we as engineers suggested was done.

As a result, in the 2000s we started flipping the process around and would lead with the legal argument first and then support this with the engineering argument. And every time we did that, we won.

It was at this stage we started changing from Risk and Reliability to Due Diligence Engineers, because it was always necessary to run with the due diligence first to make our case.

Since we made this fundamental change in service and became more involved in delivering high level work, that is, due diligence, it has also become part of the Australian governance framework.

And what I mean by that is that there’s a swirl of ideas that run around our parliaments. Our politicians pick the ideas they think are good ones. One of these was the notion of due diligence that was picked up from the judicial, case (common) law system.

There’s an interesting legal case on the topic going back to 1932: Donoghue vs Stevenson; the Snail in the Bottle. When making his decision, the Brisbane-born English law lord, Lord Aitken said that the principle to adopt is; do unto others as you would have done unto you.

The do unto others principle (the principle of reciprocity) was nothing new; it’s been a part of major philosophies and religions for over 2000 years.

Our parliamentarians took the do unto others idea and incorporated it into Acts, Regulations and Codes of Practice as the notion of Due Diligence.

That is, due diligence has become endemic in Australian legislation and in case law, to the point that it has become, in the philosopher Immanuel Kant’s terms, a categorical imperative. That is, our parliamentarians and judges seem to have decided that due diligence is universal in its application and creates a moral justification for action. This also means the converse, that failure to act demands sanction against the failed decision maker. I discuss this further along with two examples in the article What are the Unintended Consequences of Due Diligence.

To learn more about Engineering Due Diligence and the tools we teach at our two-day workshop, you can purchase our text resource here.

If you’d like to discuss we can help you make diligent decisions that are safe, effective and compliant, we’d love to hear from you. Contact us today.